I need a hero!

Good versus evil has been with us from the beginning of time. Whatever the genre romance, fantasy or detective fiction – many of our favourite stories involve a sublime double act of a hero and villain, characters that inhabit our minds and linger in the imagination long after the tale is over.

Where would our stories be without these shades and light and dark? And what makes some heroes and villains particularly delicious to follow? Needless to say, there is an infinite variety of heroes and villains that populate our stories. Well-told stories have caused us to question our assumptions and prejudices and look for the real heroes and villains within our society. We might be rooting for our heroes and heroines but we wouldn’t have great literature without great villains. What would a hero do with all that free time? They’d all be much happier and more productive members of society, sure, but their stories would be far less interesting. Villains aren’t always the most admirable characters, but boy are they fascinating. Still to be a great villain to quote Bonnie Tyler.

«I need a Hero!»
Bonnie Tyler

A well-constructed hero should therefore allow us to travel and learn important life lessons as a result. There are many challenges facing them, it is little wonder that many heroes are teaching us how to find love, defeat the bad guy, fight for good and sometimes make the ultimate sacrifice and die. After all we tend to ignore their failings and consider them in a better light if we find out they are dead, rather than alive. People associate death with greatness. We have a weekend coming based on a certain person he gave his life for all of us. There are many more still would they truly been all that without the baddie?

So to have a hero, you need a villain. And in the annals of literary history, there have been some downright scoundrels, to put it mildly. No deed is too dark, no action too despicable for this list of utter reprobates of the very worst (or best, depending on how you look at it); you should feel very glad that these dastardly characters are confined to the pages of the books that contain them. After all, the best villains are usually just as complicated and highly motivated as the heroes. They just … have a little trouble expressing themselves. What makes a person a hero or a villain? It is never enough to simply classify a character or a person. One must take into consideration what circumstances affected this person’s actions.

If suffering is essential to heroism, why is a villain’s suffering so much less valuable? Many of the most vivid villains in literature were not necessarily born to be evil. A «villain» can acquire many of his malicious and vengeful traits through the injustice and cruelty of those around him. Anyway to business here are three of the best and some honourable mentions. If we’ve missed any heroic hero or vile villains, let us know in the comments below.

Both gentlemen are smart, attractive sociopaths involved in a game of chess with everyone around them as pawns.

Sherlock Holmes is a deductive genius, using his analytic mind for the good. His life is both gloriously detached and also more deeply engaged with the crime-ridden, class-divided, evil world of late-Victorian London The good detective’s arch-nemesis Moriarty ruled the criminal underground of London and this evil mastermind was one of the few who actually rivalled Sherlock’s intellectual capacity. Ruthless, vindictive and remorseless, he will stop at nothing to destroy Sherlock. One critic has epitomised Moriarty as «crime itself», whilst Sherlock himself describes him as the «Napoleon of Crime». 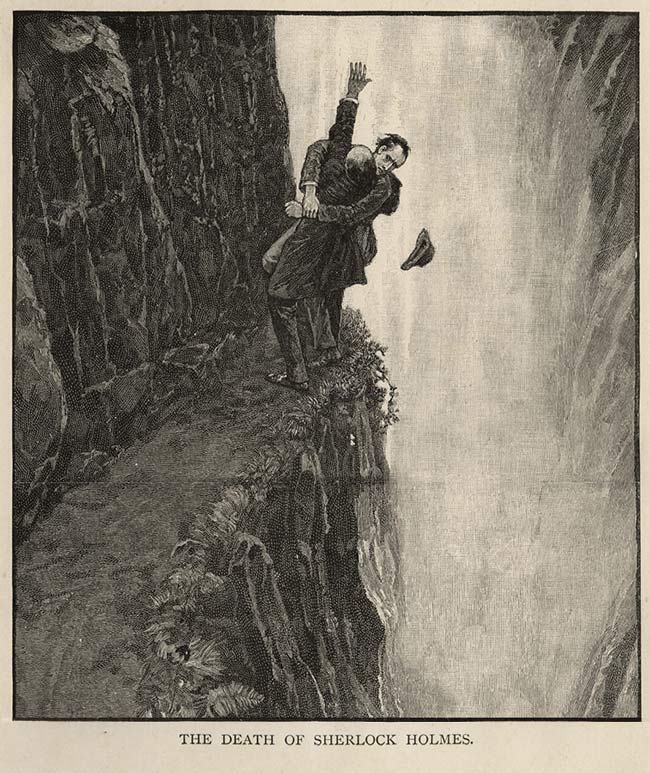 Sherlock Holmes and Professor Moriarty at the Reichenbach Falls. Ilustration by Sidney Paget to the story «The Final Problem».

Break Bond down into its constituent elements and what have you got?  Trained in intelligence and Special Forces, the superspy used the latest gadgets, thwarted Soviet agents, brought international gangsters to justice, and inevitably bedded a beautiful woman. Although Bond radiated charisma and style, he was also intensely solitary and virtually friendless, despite his many trysts.  So we have the girls, the gadgets, the Martinis and most importantly, the villains. Fleming created so many fantastic rogues that it’s hard to pick one, but we’re going with the devilish Ernst Stavro Blofeld, A criminal mastermind with aspirations of world domination, he is the archenemy of the British Secret Service agent James Bond. He is an evil genius, «number 1» and head of SPECTRE. The poster boy for all supervillains ever since. Up to and including Doctor. Evil (Austin Powers) and he comes with his own cat to manically stroke.

Who is Harry?  Well, humble, brave, and loyal. Harry will do anything for his friends, including risking his own life. He stands up for the weak and is willing to take on the evil and powerful, from snobbish classmate Draco Malfoy all the way up to Voldemort A foe so fearsome that people are scared to say his name out loud. «He Who Must Not Be Named», «The Dark Lord» are some of his more snappy nicknames, but we shouldn’t joke, for Rowling herself described him as «the most evil wizard for hundreds and hundreds of years» – that’s pretty evil. Harry Potter’s nemesis and a psychopath with a skull-like face, red eyes and snake-like slits for nostrils, he’s unlikely to win any beauty contests: a vile and villainous creature all round.

Satan (Paradise Lost) The ultimate villain in literature, on a vendetta against God his creator. He’s the basis of evil upon which we have founded our opinion of villainy.
The image on top is from John Martin’s Illustrations of Paradise Lost (1827).

Iago, the scoundrel, hates (Othello) so much driving Othello to kill his own wife. Class!

Nils Bjurman (The Girl with the Dragon Tattoo): this guy could possibly be one of the worst who manipulates Lisbeth – spoiler: she does get even.